Craig and Dave recently travelled to London to attend a training course held by Solyndra to learn how to install their PV arrays.  They were joined by engineers from South Africa, Kuwait, America, Germany and India aswell as the UK.

Solyndra designs and manufactures solar photovoltaic (PV) systems, comprised of panels and mounts, for the commercial rooftop market.  Solyndra’s technology is a proven and scalable solar solution that offers strong ROI and economics for the rooftop owner. The company has installed its systems on more than 1000 rooftops in more than 20 countries.

In 2010 Solyndra was named “One of the 50 Most Innovative Companies in the World” by MIT’s Technology Review Magazine. Using innovative cylindrical modules and thin film CIGS technology, Solyndra systems are designed to provide the lowest levelized cost of electricity and the highest kilowatt hour production per rooftop for typical installations.  The unique Solyndra form factor is designed specifically for the commercial rooftop, offering the fastest and easiest installation, a non-penetrating mounting system, and superior wind, snow and soiling performance. In addition Solyndra offers energy and conservation advantages when installed in conjunction with a white or “cool” roof. ﻿

Founded in 2005, today the company manufactures its products entirely in the United States in a state-of-the-art 300,000 square foot front-end manufacturing factory and a 500,000 square foot back-end facility. The manufacturing facility has helped Solyndra drive costs down dramatically allowing the company to offer highly competitive “all in” installed cost on the rooftop. In 2011 Solyndra will double it’s production capacity, ramping toward 300MW. The company employs approximately 1050 employees around the world and has offices in the United States, Switzerland, Germany, Italy, and France. Revenues were approximately $140 million in 2010. 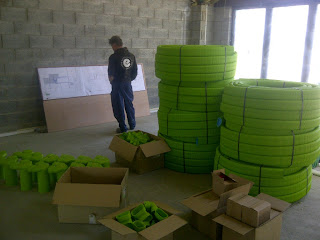 The 1kW UGE ‘Eddy’ turbines have finally arrived from Urban Green Energy! A customer of ours is investing in them and taking the risk, if they work out we will go into partnership and promote them. We are UK agents at present
Visit Urban Green Energy based in the US.
http://www.urbangreenenergy.com/
Posted by E-Si at 06:55 No comments: