We are two thirds way through Guernsey’s first Solar Century solar slate array. The largest slate array installed in Guernsey so far (none in Jersey! So the largest in the Channel Islands). Each slate panel is rated 52 watts, with 54 slates in total that’s a 2808W peak. We will be plugging into the grid next week and generating electricity whilst the rest of the build continues, offsetting energy cost of build throughout the rest of the works. 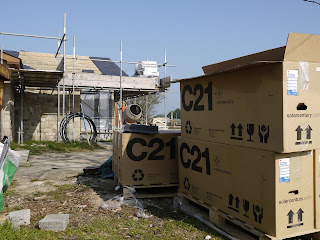 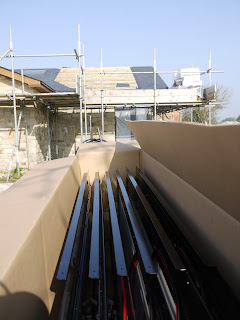 Each ‘unit’, or slate has an output of 47 watts each, and each system has 1 x ‘Inverter’ that ALL units plug into to make ONE system.In this case we have a maximum spread constrained by the installation method across all the useable South West roof areas.The aim is to integrate into the building structure the system such that it is normally NOT noticeable, and becomes PART of the building itself, not an external feature. 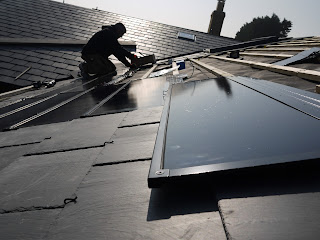 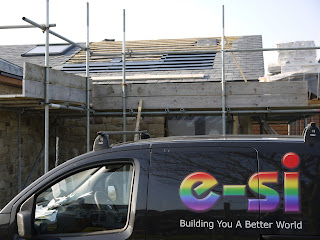 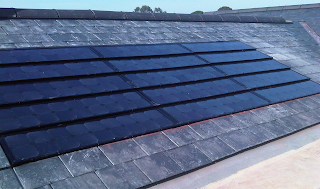 Guernsey Electricity pays the homeowner a ‘Feed in Tariff’ or FiTof a value equal to the cost of GE’s generating or purchasing electricity.
This is approx 6p a unit at this date, and varies monthly.

Why are solar photovoltaics important to both the local and global economy?

•This makes it possible for solar photovoltaics on homes to displace electricity used for heating.

•Meanwhile, energy costs will rise, whatever we do, oil more-so, contributing to higher running costs for society and continued recession.

•We have to all invest ‘above the bottom line’ in Renewables to reduce the cost of energy to society to enable a robust economy.